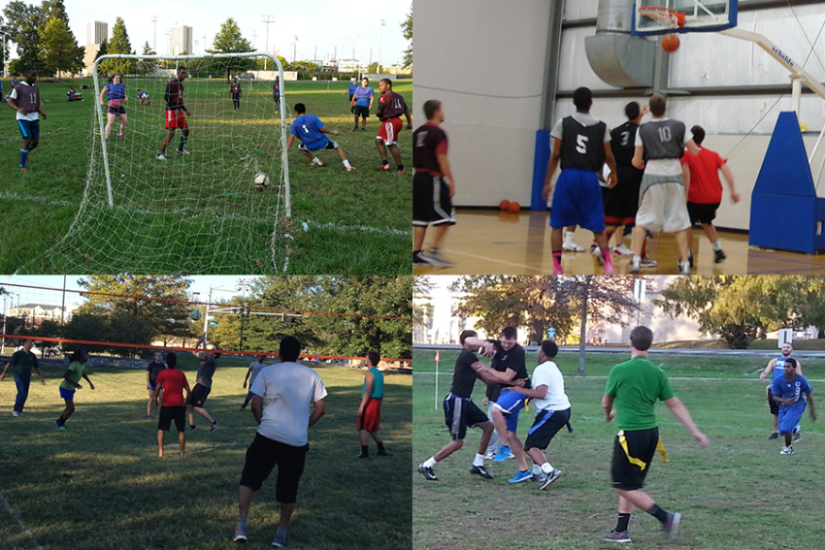 Intramural Sports promote organized recreation, student involvement, exercise, stress relief and commUnity!  Fall sports include soccer, volleyball and flag football. Basketball is offered in the spring.  Whether you are a novice, a new beginner, skilled or just want to learn a new sport, Intramural Sports is for you. Come join the fun!

Check out some of our Intramural Sports photos on Flickr.

Fall sports include soccer, volleyball and flag football and are played at the Cooper campus location. The spring basketball league plays at the Kentucky Basketball Commission. Participants are responsible for their own transportation to/from Intramurals.

The next Intramural Sports Information Meeting will be held:

Note: Cooper Campus parking lot is not patrolled after 3:30 PM

Attend the Sports Information Meeting to become better acquainted with what BCTC Intramural Sports has to offer. Registration and Release Forms are available via 103J Oswald Building/Cooper campus, seasonal registration tables located at Newtown and Cooper campus lobby areas, or go to 'How Do I Sign Up to Play?' section below on this page, for more instructions.

Knowledge and skill levels vary from novice to beginner to advanced. All are welcome!

You have the option to join a team, make your own team or be placed on a team by the Intramural Director. BCTC Intramural Sports are open/gender-neutral.

2.  Download, print then email Registration and Release Form and a copy of your current class schedule to: donnalj.murphy@kctcs.edu or hand deliver to 103J Oswald Building/Cooper Campus.

3.  Attend the Intramural Sports Information Meeting in the fall to find out more about the sport offerings and how to become a participant.

*Registration and Release Forms are also available at 103J Oswald Building/Cooper campus, seasonal registration tables located at Newtown and Cooper campus lobby areas, or go to forms section below on this page.

No player may play on more than ONE Men’s League Team. Rosters will be checked frequently. Playing on more than one team will result in automatic forfeit as well as possible suspension. Team Captains, please confirm with your players that they are on your team and your team only.

The BCTC Intramural Director reserves the right to rule on any case not specifically covered in the rules of the game or in these guidelines and will do so in the spirit of the rule, and of fun, fair and safe participation. The Intramural Director also reserves the right to put into effect and/or make necessary changes/additions to these guidelines including any new rulings pertaining to Intramural sports, unsportsmanlike behavior, fair play safety of the participants, or any other item to foster the enhancement of the event/activity and the college’s mission for Intramural sports.